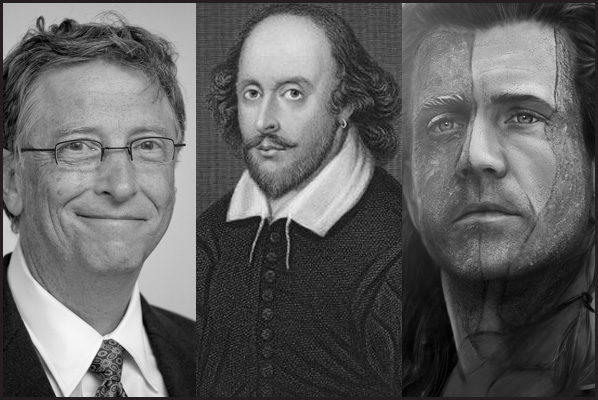 There are many who are named William and are known for making their mark on our world. But the three Williams pictured here shared far more than just a name: William Wallace, William Shakespeare, and William Gates III. Do you know their stories? Most of us would agree that innovating and resisting the status quo are hard things worth doing (#HTWD). These men have demonstrated how dwelling on the edges with the spirit of a pioneer can change the way we all think.

We recently talked about some known game changers. Are you a game-changer? Or like many who prefer “dwelling on edges,” do you inspire others when you confront that territory where known and unknown meet?

Think about this: Can influencers compel us to push boundaries when they are standing right next to us? Or is their influence more effective when they stand at the edge of what’s thought to be possible?

Some influence with courageous resistance to bad ideas.

William Wallace paid the ultimate sacrifice to stand for an independent Scotland. But his country would not be free for 23 years after his death. Wallace’s drive to risk it all for freedom became infectious. His death as a martyr inspired the right men at the right time.

Some influence with creative storytelling and visionary ideas.

It is said of William Shakespeare that he had a sketchy history and a modest background. Yet his characters and plots were labeled “transformative.” They transcended the time in which he lived. In fact, his reputation as a dramatic genius wasn’t recognized until the 19th century. He asked compelling questions and inspired edgy thinking.

For example, “Be not afraid of greatness: some are born great, some achieve greatness and some have greatness thrust upon them.”

And some influence with innovative thinking and persistent ideas.

William Gates III (aka Bill) has built the largest software company in the world on a steady flow of asking really good, problem-solving questions. He’s gifted, but not glamorous. He’s memorable. But is he any more remarkable than other innovative thinkers of our time?  Like Shakespeare and Wallace, will his ideas inspire us for centuries to come?

Inner Strengths Enable Thinking that Lives Beyond Its Origins

Edge dwellers, like these three William’s, think differently about the boundaries between possible and not possible. They understand that to redefine the possibilities in life, they must use their inner strengths in brilliant fashion.

William Wallace used his inner strengths of boldness, action, tactical problem-solving and optimism to inspire and sustain a nation. Their fight for independence did not die with him. His death emboldened them.

William Shakespeare used his passion, emotions, idealism and his abstract thinking to communicate in ways never experienced before. Didn’t he significantly change with his creative works the way others thought about their life experiences?

Bill Gates is still working to impact lives with his intense curiosity and determination. Has he not proven that innovation and philanthropy can go hand in hand?

How Do You Feel About the View from an Edge?

Do you prefer to live life out on the boundaries where new possibilities are discovered? Developing your inner strengths and dwelling on edges can be your legacy.

What if you do not appreciate the view from the edge? That’s good, too. We need both those who push boundaries and those that reinforce them.

It’s time to understand more about your own drives, preferences, and inner strengths.

Become well acquainted with your inner design and learn how to use your inner strengths correctly by grabbing a copy of INNERKINETICS – Your Blueprint to Excellence and Happiness.

Once you discover your inner design, here’s a helpful chart to focus on your own inner strengths that fuel that design.

#HTWD, dwelling on the edges, game changers, innovating, resist, spirit of a pioneer